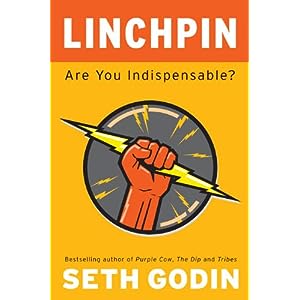 ﻿﻿﻿Last week I mentioned that we were going to be doing a regular feature here on the Brandscaping blog, and since the week has just about slipped away, we figured now would be a great time to share the first of hopefully many posts about local Linchpins.

So, our first Local Linchpin, Mike Vardy, is a well known name in the social media world, the arts world, and in local publications.  He’s one of those guys that make you wonder how he gets any sleep.  Oh yeah, he’s the editor of one of Envato’s popular websites – WorkAwesome.com Always working on a project, but always has time to chat with anyone.  Going anywhere with Mike is a bit fascinating, as he seems to know, and be known by, everyone in Victoria.  By day he’s a mild-mannered freelancer, and by night he’s a husband/daddy superhero.

But this isn’t what makes Mike Vardy a Linchpin.

Knowing a bunch of people in your community is one thing, and being known by them all is another.  There are hundreds of cyberstalkers here in Victoria who know a bit about everyone, and Ian Thow is very well known by the folks here.   That alone doesn’t make a Linchpin.  It’s Vardy’s ability to make connections among the people he knows that makes him a Linchpin.  Whatever your project, whatever you need, it’s not a bad idea to pick Mike’s brain for a few minutes, as you will likely walk away knowing who you should talk to in order to get your next project off the ground.  And he makes these connections with no expectations, and no hesitation.

We asked Mike what being a Linchpin means to him, and this is what he shared with us:

What qualities/traits make a person a Linchpin?

I think it takes a certain type of drive and ambition to be a Linchpin. The desire and need to get your thoughts and ideas out into the world is something that a Linchpin possesses. For me, I know that unless I’m doing something creative or insightful (or both) that I know would make the world a better place — usually through humour — I’m not really living a fulfilled life.

Who are the Linchpins in your life?

Well, I’ve worked for several. I think that might have been the impetus for me to go out in the world on my own and work for myself, follow through on my passions.

My Linchpins would probably be those people that I’ve met online as a result of my productivity parody site, Eventualism. People like Leo Babauta, Merlin Mann, Chris Guillebeau and a bunch of others have really shown me that living life on your own terms is not only possible, but it’s not as difficult as one might think if you have the right mindset. And if you’re willing to work for it. The last part is easier if you really love what you’re doing, because then it’s not much like work at all.

What advice can you give to someone who wants to be a Linchpin?

Get in touch with yourself. Look deep and figure out what it is that you really want to do with your life. Ask yourself if what you’re doing now is truly fulfilling on a myriad of levels. Your professional life can affect your personal life, either positively or adversely, depending on what you are doing and if you’re doing what you’re meant to do. Then work at it. Take the risks necessary to make it happen.

If you haven’t had the chance to meet Mike yet, hit him up on twitter, or check out one of his many blogs.  You will be glad you did, and more than likely, Vardy will give you actionable ideas, no matter what topic you are discussing.

Local Linchpins make our community better – and we’d love to learn more about them. We’ve got a list of upcoming Local Linchpins, but  if there is someone in the community that you think should be mentioned, shoot us an email or leave a note in the comments.